The bridges of India are more-than-welcome steel-and-iron giants, reaching far and wide while overcoming natural barriers of waterbodies, marshy areas, and rocky terrain, as well as manmade blocks of vehicular traffic, overbuilt cities, and inefficient urban planning. They are portals that transport people, goods, and services, in ways not possible before they existed. Bringing in prosperity and taking away those fleeing the ennui of familiarity, they are changing every life daily. Here are five of the longest bridges in India.

Also known as the Dhola-Sadiya Bridge, the Setu, at 9.15 km in length, is the longest bridge over water in India. This beam bridge connects the North-East states of Assam and Arunachal Pradesh. Curving over the River Lohit, one of the river’s main tributaries, it is the first permanent road connection between northern Assam and eastern Arunachal Pradesh. The Bhupen Hazarika Setu has been designed to handle the weight of 60-tonne Indian army battle tanks such as the Arjun and T-72. The bridge is essential to the ongoing Indo-China tussle over Arunachal Pradesh.

The 6.20-km-long bridge over the River Dibang, connecting Meka with Bomji in the Lower Dibang valley in Arunachal Pradesh, is the second-longest bridge in India. Covering almost 11 tributaries of the river, it is part of NH 13 Trans-Arunachal Highway and is known as Sikang in the Adi dialect and Talon in the Idu Mishmi. The third-longest bridge in India is the Mahatma Gandhi Setu, also called Gandhi Setu or the Ganga Setu, and runs across the River Ganga in Bihar, connecting Patna in the south to Hajipur in the north. It was inaugurated in May 1982, and in 2017, it remained the longest bridge in India. In the year 2020, it underwent repair and maintenance by way of triangular steel trusses, which were installed on each flank of the bridge. The renovated Western flank was opened to the public on 31 July 2020.

The 5.6-km-long, cable-stayed bridge is the first in India to be built over a bay. The eight-lane bridge connects Bandra with Worli and is the longest sea bridge and the fourth longest in India. While it continues to connect the suburbs with south Mumbai, it will eventually be a part of the Coastal Road reaching the far suburb of Kandivali. The sea link has helped eased peak-hour traffic woes, especially as the toll-free Mahim Causeway is still preferred by many. 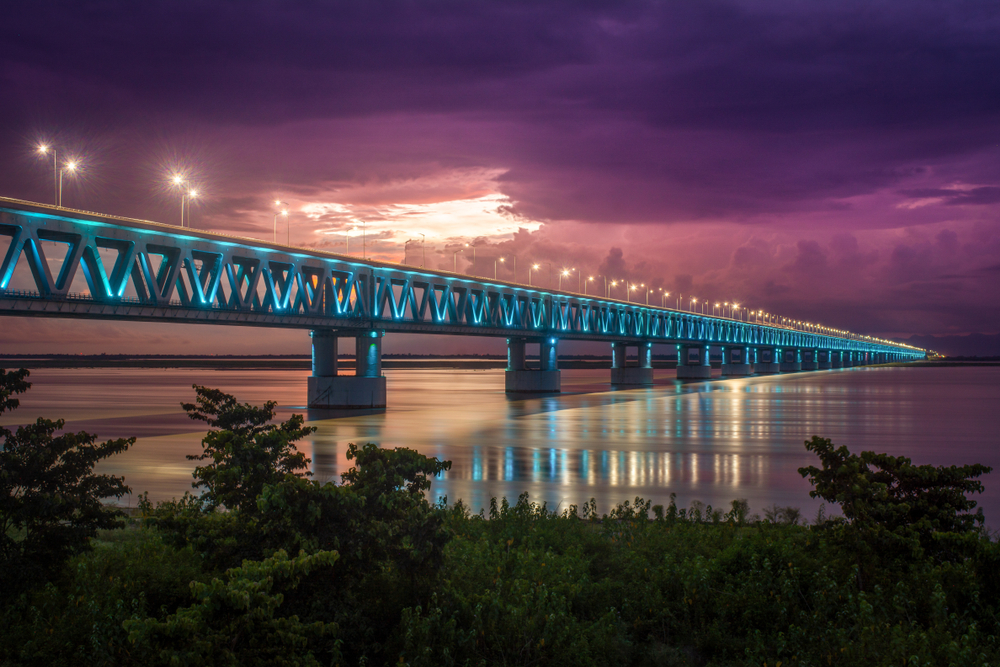 The 4,940-metre-long Bogibeel bridge is currently the longest rail-road bridge in India. Crossing the expansive River Brahmaputra, this two-tiered bridge has a three-lane road atop a double-line broad gauge railway track. The Bogibeel bridge has helped reduce distances tremendously. It decreased by 55 km, the 444 km distance between Dibrugarh and Guwahati; it has improved the connectivity of Assam with the southern states of India and even reduced the distance between New Delhi and Dibrugarh.