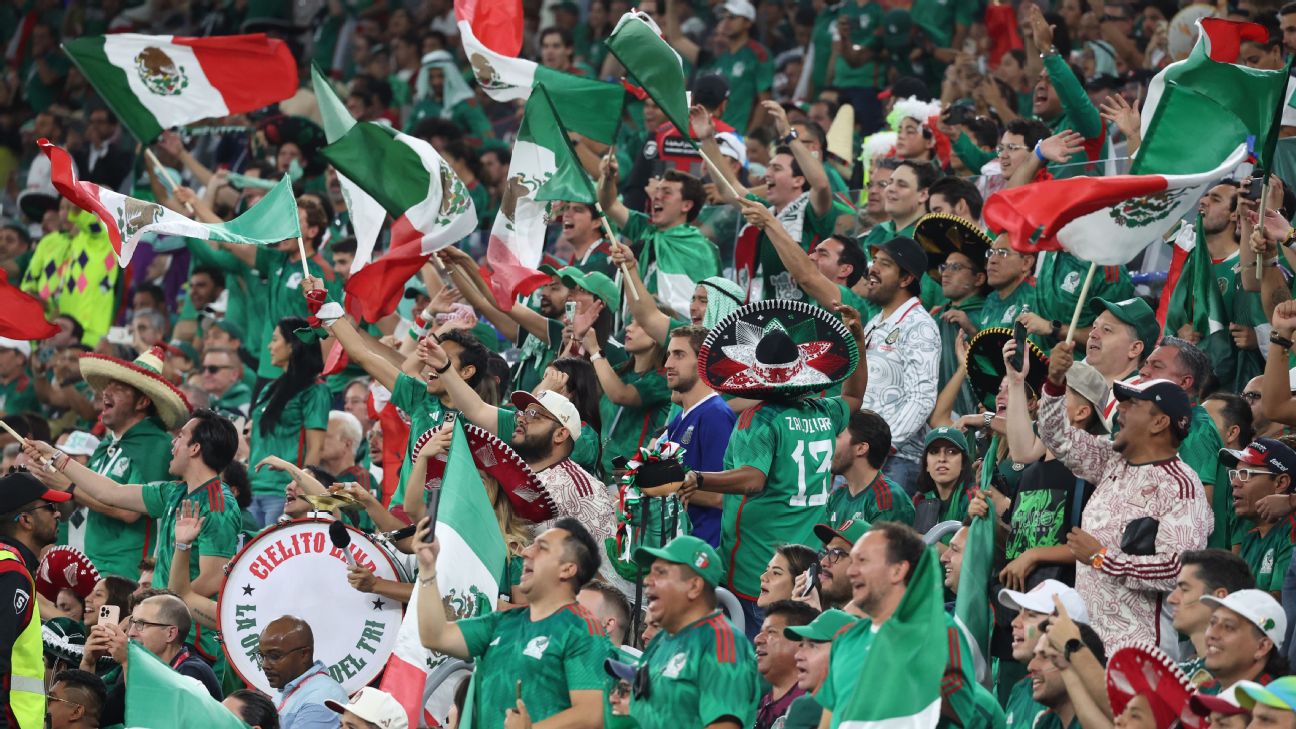 DOHA, Qatar — Halfway across the globe from North America, a small mariachi band begins to play.

It’s the day before Mexico‘s first match in the 2022 World Cup and hundreds of fans, possibly even in the thousands, have assembled in the Katara cultural village. Surrounded by a lavish shopping mall, museums and art galleries, El Tri supporters have turned the once tranquil and quiet plaza into a raucous party.

Costumes ranging from calavera-inspired outfits to luchador masks pack the area that is filled with banners, flags, and most importantly, music. Wandering through the crowd, the melodies quickly change from the mariachi playing to a large section of fans, to others belting out Cielito Lindo, while another group emotionally sways and sings along with a speaker that is blaring Vicente Fernandez.

“Mexico has one of the loudest fanbases in Qatar. We rival the Argentinians and Brazilians,” said Zargento Tinoco, a Mexico fan from Phoenix, Arizona who was at the event. “What sets us apart is we are also admired by other nations because we bring color, life.”

The party continued into the late afternoon as a sea of green kits began to spread and swell in the plaza.

It was an unmistakably boisterous event — and one that almost seemed to compensate for the concealment and lack of comments from the national team they’re all there to support.

In a miniscule World Cup where most squads have put base camps in or near Qatar’s capital of Doha, Mexico have made an effort to literally distance themselves.

Close to an hour’s drive north of downtown Doha, or approximately an hour and 45 minutes using public transportation, El Tri are noticeably isolated with their practice sessions in the city of Al Khor. Away from the noisy epicenter of the tournament, and near the World Cup venue (Al Bayt Stadium) that is the furthest away from the rest, Mexico have trained and prepared in Al Khor SC Stadium.

In Qatar, media availability has been highly limited. Unsurprisingly for a team that has mostly remained behind closed doors, Mexico goalkeeper Guillermo Ochoa spent a good portion of his news conference criticizing the way media have covered the national team, going even as far to say that “it has turned into a show … we don’t even talk about the sport anymore.”

In contrast, in the stands at Stadium 974, Mexico’s fans couldn’t have been any more vocal. With 39,369 packed into the building, El Tri supporters easily outnumbered their Polish counterparts. Were it not for the World Cup branding all over, one could have easily guessed that Tuesday’s match against Poland was taking place in Mexico City’s Estadio Azteca or Pasadena’s Rose Bowl, based on the composition of the crowd alone.

“The opening game was next level, the national anthem was one of, if not the loudest, I’ve heard at a game,” said Tinoco. “I still get goosebumps thinking about it.”

Unfortunately, the game that ended in scoreless draw was also one that would soon surround itself in controversy. On Wednesday, FIFA announced that it had started an investigation into potentially discriminatory chants from Mexico fans at the game.

It is unclear from the statement whether the latest FIFA proceeding is due to the anti-gay chant that has previously marred El Tri matches, or other behavior from Mexico supporters. Some detractors have pointed out the irony of FIFA doing so amid the threats of handing out yellow cards to captains who wear the rainbow “One Love” anti-discrimination armbands.

No decision has yet to be made from the investigation, but for better or worse, Mexico fans have once again brought the spotlight upon themselves in the early days of the World Cup.

Up against Argentina this Saturday in what is one of the most anticipated matches of the group stage, that focus will grow even brighter when arguably two of the most passionate and expressive fanbases in the tournament will converge at Lusail Stadium.

While Mexico are seeking their first victory of the group stage, Argentina will aim to bounce back after their shocking 2-1 loss to Saudi Arabia earlier this week.

“Argentina, a great opponent,” said Hirving “Chucky” Lozano in a pre-game news conference on Friday. “A tough opposition, they have the best in the world [in Lionel Messi] and great players. We’ve been working these days to arrive in the best manner for that game.”

Amid the FIFA investigation, there will be plenty of eyes on not only what happens on the field, but also off it with the behavior of Mexico supporters. It’s a guarantee that just like in the Katara cultural village and at Stadium 974, they’ll undoubtedly be as near-deafening and emphatic as they’ve been since they arrived in Qatar, but it remains up in the air if they’ll also run into trouble along the way.

No matter what though, that sea of green will once again be very, very loud.

Previous article
World Cup 2022 odds: How to bet Belgium vs. Morocco, pick
Next article
A recap of Vogue India’s first edition of Forces of Fashion in collaboration with the Natural Diamond Council

Arman Shirinyan Contents Volume/price divergenceProblems with stakingChainlink has been showing solid price performance in the last few months as...
Investments