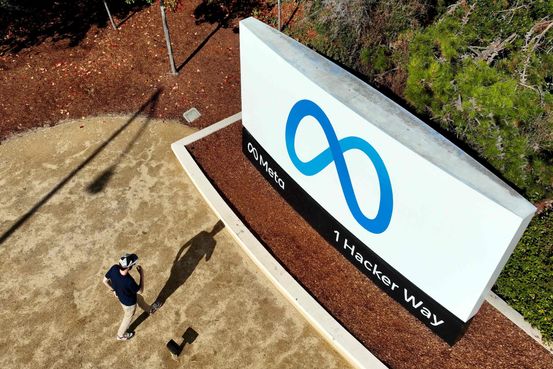 Part of what has made America’s job market so tight is that big, publicly traded companies hired like crazy after the pandemic struck. Now that many are slamming into reverse, it seems like there is a wave of unemployment under way.

parent Meta Platforms are all suddenly recognizing that they overhired and are firing workers. For the people affected, job losses are horrible. But when it comes to the job market, rather than thinking of these layoffs as a sign things are falling apart, they might be an indication that it could come into better balance.

In its fiscal year ended December 2019, securities filings show that Amazon.com had 798,000 employees. By the end of last year, that figure had risen to more than 1.6 million—a gain of 810,000 workers. For comparison’s sake, the population of North Dakota, the fifth-smallest state, is about 750,000. Amazon’s gain was the biggest, in absolute terms, of any company, but it was hardly alone in substantially increasing its head count. Meta went from 44,942 to 71,970 employees over the same period, and by the end of the third quarter that figure had climbed to 87,314.

In fact, more than 100 companies within the S&P 500 raised employment by more than a fifth between their last prepandemic fiscal year—here defined as the fiscal year that ended March 2020 or earlier—and the most recent fiscal year data is available for, according to

Of the 484 companies in the S&P 500 with available data, head count between the prepandemic and latest fiscal periods rose from about 26.4 million to 28.5 million employees, a gain of about 2.1 million, or 8%.

Caveats abound, of course. Many multinationals employ a substantial number of people overseas, for example. Moreover, when companies make acquisitions they can increase their head count without actually hiring anybody. Still, the gains are notable compared with what has happened in the labor market at large. There were a seasonally adjusted 131 million employees on private payrolls in October, according to the Labor Department, a gain of 1.3 million, or 1%, from the prepandemic peak set in February 2020. Absent employment gains at big public companies, America might still have fewer jobs than before the Covid-19 crisis struck.

The hiring they engaged in is a reflection of how well-placed many were for the surge in activity resulting from the pandemic. Many make and sell stuff. FactSet figures show the 213 manufacturing and retailing companies in the S&P 500, under the classification system used by the Labor Department, account for more than half of employment in the index. By contrast, those industries account for only about a fifth of overall private U.S. employment.

Many others, such as Meta, Netflix and Electronic Arts benefited from the extra time Americans spent at home. And, surprisingly, some companies in areas of the economy hit hard during the pandemic hired a lot of people too. Domino’s Pizza and

added workers, using their size and scale to weather lockdowns and take advantage of increased demand for takeout. The same can’t be said for many mom-and-pop eateries, sadly — overall U.S. restaurant employment remains below its prepandemic peak.

Just because a company bulked up doesn’t mean that layoffs are coming. Employment at

went from 830 workers at the end of 2019 to 2,700 at the end of 2021, for example. But, considering that it was one of the companies to develop a Covid-19 vaccine, and is now working to apply its messenger RNA technology to vaccines against other illnesses, that doesn’t seem excessive. And at some companies, increases in demand outstripped gains in employment; for example

nearly doubled its workforce from 2019 to 2021, and has further raised its head count since then, but its sales roughly tripled while net income quintupled.

Still, given how many people were hired, more big layoffs might be coming, especially considering how consumer spending preferences have been shifting back toward services and away from goods as interest rates rise and pandemic caution fades.

But eye-catching layoff announcements might not count as a sign the job market is about to go south. So far they have largely affected higher-income, higher-education workers who, while undoubtedly worse off than if they hadn’t been fired, can often find jobs elsewhere. The median worker at Meta earned $292,785 last year, for example. The median Amazon worker made much less—$32,855—but Amazon’s layoffs are targeted at its corporate employees rather than warehouse workers. Their ability to be reabsorbed into the labor market might help explain why, despite all the layoff announcements, the number of people filing new claims for unemployment benefits has remained so low.

Heard on the Street

Agenda-setting analysis and commentary on the biggest corporate and market stories.

Meanwhile, many industries that aren’t well-represented in the stock market are having trouble hiring. In the private sector education and health-services industries, for example, Labor Department figures show that employment has only recently surpassed its prepandemic level, while the job-opening rate—the number of job openings as a share of filled and unfilled positions—is at an all-time high. The leisure and hospitality sector employed more than a million fewer people in October than in February 2020, and there, too, “help wanted” signs abound.

So what could actually be coming is a reshuffling in the labor market, with many of the workers who got swept up by public companies after the pandemic hit ending up elsewhere.

That won’t be a lasting setback for many people affected, and might not be a bad thing at all for the economy either.

10 Awesome PlayStation 5 Features You Should Be Using

DOHA, Qatar -- Remember 1966? You might have heard it mentioned every now and then...
Crypto

Paris Saint-Germain president Nasser Al-Khelaifi has said he is confident Lionel Messi will stay at...
Health