For Dad Sham Kaushal, Sons Vicky And Sunny Posted This It is Sham Kaushal’s birthday today and wishes are flowing in from all quarters for the veteran stunt coordinator and action director. On top of the list is a heartwarming message from his elder son, actor Vicky Kaushal. On the occasion, Vicky Kaushal decided to share a black and white image of his father making the gesture of a hug at what is presumably an event. In the image, Vicky Kaushal’s mother Veena Kaushal is also seated next to her husband. Sharing the image, Vicky said, “My pillar of strength…Happy birthday to my dad. Kichke jhappi twahnu [Tight hug to you],” with happy emojis. 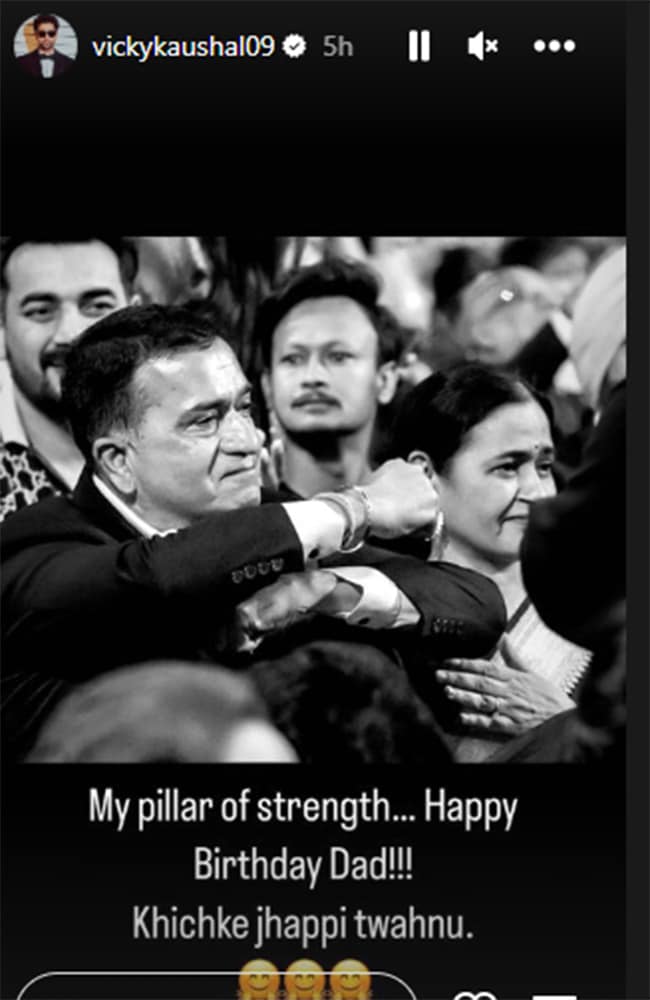 Vicky Kaushal’s brother, actor Sunny Kaushal too shared a post on their father’s birthday. Sunny chose a throwback image of a young Sham Kaushal looking handsome in a shirt and a pair of jeans. Addressing the style quotient in the image, Sunny said, “I guess now I know where I get my style from…Happy birthday to the OG Kaushal,” and tagged his father. Replying to the post. Vicky Kaushal dropped red hearts. Dad Sham Kaushal too didn’t miss the sweet gesture. He wrote, “Love you, Puttar [Son]. Proud of you. Jor di jhappi [A tight hug].”

Like his sons who often celebrate him on social media with special posts, Sham Kaushal too shares lovely images of his family on Instagram regularly. A few weeks ago, Sham Kaushal shared an image with Vicky and wrote, “Sun on one side, Son on other side and Sunny Son in the front capturing the moment. All three sources of my energy. Rab Rakha.”

Before that, Sham Kaushal had shared another throwback image from the sets of Asoka. In it, Vicky and Sunny Kaushal are seen posing with Shah Rukh Khan, who played the titular role in the film. “By God’s grace, this photo was taken in 2001 during the shooting of Asoka in Film City. Vishnu Vardhan was the assistant director and Vicky was studying in 8th standard. Nobody ever imagined that one day Vicky will join the film line and in 2022 both of them will be winning Best Director & Best Actor Awards respectively for Shershah and Sardar Udham. Destiny and God’s blessings. Rab di meher,” the proud father wrote.

Sham Kaushal is known for his stunt direction and action choreography in films such as Dangal, Don, Bajirao Mastani, Padmaavat, Krrish 3 and Bajrangi Bhaijan among others.

Previous article
Kim Kardashian Tells North About the Night She Was Conceived – E! Online
Next article
Here’s how you can get big and fluffy, soap brows in a few seamless swipes