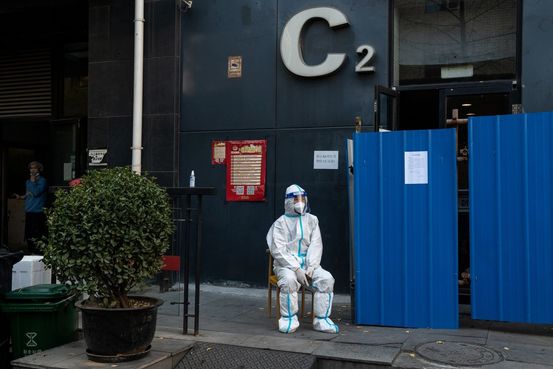 Beijing’s battle to contain the virus—including sharp restrictions on everyday life and commerce in cities from the major port city of Tianjin in the north to Guangzhou in the south—comes as economies elsewhere lose speed as central banks raise interest rates to beat back inflation.

The heavy-handed and widely applied steps send a strong signal that the country and its leaders aren’t ready for a sustained reopening almost three years after the start of the pandemic and long after other major economies have dismantled almost all Covid controls.

Beijing’s continued zero-tolerance approach to Covid likely means the world can’t rely on China to be a locomotive of growth as the U.S. and European economies slow. Many economists expect the U.S. to tip into recession sometime in the next 12 months.

“There has been some anticipation that as the world slows down, China picks up,” said

chief economist for Greater China and North Asia at Standard Chartered in Hong Kong. That is now unlikely to happen in the first half of next year, he said.

A possible silver lining, economists say, is that weak growth in China next year could mean less demand for energy and other commodities and less upward pressure on global inflation, which could bring much-needed relief to central banks, consumers and businesses.

But a repeat of the severe disruption to global supply chains that coincided with the two-month lockdown in Shanghai in the spring could bring price pressures of its own.

success in securing a third term in power at a Communist Party gathering this fall had raised expectations among some investors that a more rapid pivot away from Beijing’s zero-tolerance approach could be in the offing.

In November, the government published a 20-point plan to refine some virus controls, such as reducing quarantine periods and easing restrictions on close contacts of confirmed cases, raising hopes of a reopening bounce in the Chinese economy.

A sustained easing of Covid controls is unlikely until China’s government can boost vaccination rates, especially among its large number of relatively less-immunized and more-vulnerable older citizens, and expand hospital capacity.

in the central Chinese city of Zhengzhou—where workers clashed with police this week during protests after weeks of strict Covid controls.

Thousands of workers had earlier fled the plant, while mass quarantining of employees depleted capacity on assembly lines, and

had already warned that shipments of high-end iPhones would be lower than expected because of those disruptions.

Economists and supply-chain experts say they are cautiously optimistic that disruption on the scale seen during Shanghai’s lengthy lockdown earlier this year is unlikely, given the big pullback in Western demand for goods as consumers tighten their belts.

But they say that problems could still arise, especially if lockdowns affect major ports or airports or restrictions persist well into next year.

“Is it going to be as bad as before? The general sense is no,” said

general manager of network collaboration at FourKites Inc., a Chicago-based freight-tracking technology supplier. But, he said, if outbreaks worsen in cities with major ports, “that would be a huge concern.”

China reported nearly 30,000 new locally transmitted Covid infections on Wednesday, the highest on record, with outbreaks in every region of the country.

New curbs on daily life and economic activity have been imposed in cities including Beijing, Guangzhou and Tianjin. Shijiazhuang, a city of 11 million people southwest of the capital, tried easing some control measures but reversed course within days after case numbers rose.

More than 80 cities are battling high levels of infection, compared with 50 during Shanghai’s lockdown, according to a report on Wednesday by Capital Economics, a consulting firm. Those 80 cities generate half of China’s annual gross domestic product—and ship around 90% of its exports—the report said.

Economic signals were already pointing to slowing growth before the latest round of restrictions. Official gauges of factory, construction and service activities in China tumbled into contraction territory in October, while exports fell from a year earlier.

Some economists have cut their growth forecasts in response to the latest outbreak.

chief China economist at Nomura in Hong Kong, said in a note to clients Thursday that he now expects China’s economy to shrink 0.3% in the fourth quarter compared with the third. And he cut his forecast for full-year growth to 2.8% from 2.9%.

The State Council, which serves as China’s cabinet, on Wednesday pledged fresh support for the economy as the outbreak worsened. The council telegraphed that the amount of reserves banks are required to hold against deposits would soon be cut by the central bank, freeing them to lend more.

Economists say the strength of any rebound next year will depend on China finding a workable exit from its zero-tolerance Covid strategy. Other countries have experienced at times steep or even repeated “exit waves” of infections as they dismantled Covid controls, which can themselves be damaging for economic activity as sickness depletes the workforce and people limit social contact.

Most economists doubt China will move especially swiftly, with authorities instead opting for a slow, step-by-step approach to relaxing their strict Covid strategy. Mr. Lu and others say that process is unlikely to even begin until the second quarter of next year and will probably be marked by frequent reversals as authorities grapple with repeated flare-ups.

The nation’s economy is also struggling with a real-estate slump and faces new headwinds from a U.S. decision to ban exports of advanced semiconductor chips and technology to China on national security grounds.

Some of the latest signals from the global economy suggest the current slowdown is getting worse, but overall may prove milder than many economists had expected.

Business surveys released Wednesday pointed to declines in output across the U.S. and Europe’s largest economies in November. But the outlook is mixed, with some parts of both economic areas continuing to show resilience despite high inflation and rising interest rates.

Whether the global economy skirts recession or suffers a bad slump in large part depends on the actions of central banks, economists say. Raise rates aggressively and they risk taming inflation by cratering growth; act too timidly and inflation may reaccelerate.

At their meeting this month, most Federal Reserve officials thought they should soon slow the pace of interest-rate increases after four consecutive 0.75 percentage point increases, a sign that some policy makers are growing anxious about the possibility of tightening too much.

Nancy Tartaglione The BAFTA Film Awards are being “revitalized” with a new format set for the...