Bigg Boss 16: After Fight With Soundarya And Sreejita, Tina Datta Pleads To Be Sent Home 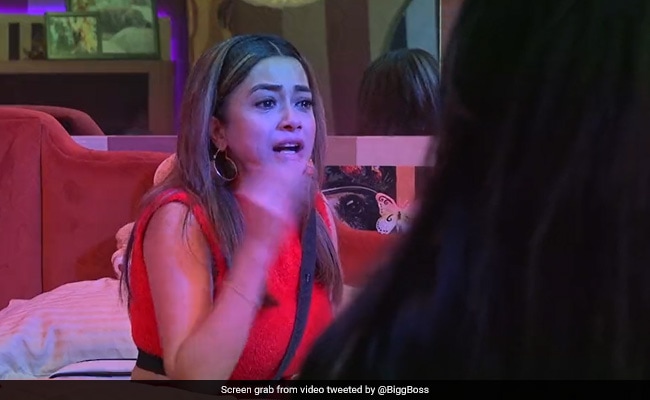 Tina Dutta in a still from the video. (courtesy: BiggBoss)

Tina Datta has had a rough few days in the Bigg Boss 16 house. After fights with friends Nimrit Kaur and Shiv Thakare, the actress was taken aback when eliminated contestant Sreejita De reentered the house as a wildcard contestant. She had an argument with Sreejita, following which Tina and Soundarya Sharma were seen fighting over vegan food. All the fights seem to have taken a toll on Tina, who is seen breaking down in front of host Salman Khan and even asks to be sent home. In the new promo, Tina tells Salman that she is not feeling good and that she wants to talk to the actor in the confession room.

It all started when Sreejita De made a comeback to the house and said Tina Datta has a “black heart” and that she is filled with “negativity”. To this, Tina walks out of the conversation. “One of our friends got married into a rich family. We were sitting and having a conversation in Goa. Tina started saying uski life toh set hai. The friend’s father-in-law is a very rich person. He has a penthouse and is fully loaded,” adding that the way Tina said “fully loaded” did not go down well with Michael, Sreejita’s fiance. She adds that Shalin should also pursue Tina only if he is “fully loaded”. However,  Nimrit and Soundarya say that Shalin and Tina are in a relationship of convenience.

Soon after, Tina is also accused of taking all the vegan food by Soundarya Sharma. She breaks down and this leads to another fight with Soundarya and others.  She also pleaded to the show’s team to be sent home.

Tina hui upset unpar lagaaye huye ilzaam ki wajah se, how will she get over this feeling? ????

This week Ankit Gupta has been elected captain of the house. Tina Datta, Nimrit Kaur, Sumbul Touqeer and MC Stan have been nominated for elimination. You can watch Bigg Boss 16 on Colors TV from Monday to Friday at 10 PM. On weekends, the episodes begin at 9.30 PM.  The show is also available on Voot Select with a 24*7 stream.

Alia Bhatt’s Fitness Coach: “She Could Eat Whatever She Wanted While Pregnant”

Previous article
Bigg Boss 16: Salman Khan Opens The Doors For MC Stan As He Leaves The Show, Says ‘Jaana Hai Toh…’
Next article
Addition under section 69A of the Income Tax Act cannot be made